Could You Have a Valuable Piece of British Sterling Silver?

Could it be possible that you have a valuable and misattributed piece of silver at home? Most likely, you have some pieces of silver that are inherited and along with the silver came a story about its origin. These stories are the curse of the appraisal profession. True, these stories add interest to the objects, but quite often they prove to be untrue. Often, an appraiser must deliver the sad news that a piece is not as fine, valuable or old as family legend purports. The story usually unfolds with being handed a silverplate tray that is marked with pseudo hallmarks. It has been passed down as a fine piece of British sterling silver. But sometimes the story will prove to be true, or even better, the piece will prove to be finer and more valuable than you thought. By learning a few tips of the trade, you can discover when and where your silver was made, and who made it. Plus, you might discover a valuable piece of British silver at an estate or tag sale. These items are often overlooked because of the way they are marked and where they are marked. (The pair of Hallmarked London sterling silver shakers pictured above could have easily been passed off as silverplate since they are marked on the bottom edge rather than the bottom of the piece) This blog post will concentrate on learning to read British sterling silver hallmarks. Stay tuned….Future posts will cover American silver marks and confusing pseudo marks.

The ABC'S of Hallmarks

There is more to reading hallmarks on silver than knowing your abc's. Let’s begin with a quick background in why marking silver came about. Basically, hallmarks on silver were a way to assure the customer that the object he was purchasing had met standards of purity enforced by law. By 1238 in England, severe penalties were inflicted by the guild of the Goldsmith's Hall upon a craftsman whose pieces did not come up to the standard of 925 parts silver per 1000. Remember pure silver is far too soft to be useful. Through a process of trial and error, the ideal proportion of 925 parts pure silver to 75 parts copper was discovered. This combination is still in use today. When you hear the term “Sterling” silver, it means that the piece is 925 parts sterling to 75 parts copper.

What to Look For

You may have a piece of silver with a group of marks that looks somewhat like this:

The Crown signifies the city of Sheffield, lion passant indicating sterling silver, Letter n of a style dating the piece to 1905 and a maker's mark for Walker & Hall.
Credit for the image: https://commons.wikimedia.org/wiki/File:British_hallmarks.jpg The original uploader was Mrs rockefeller at English Wikipedia., CC BY-SA 3.0 <http://creativecommons.org/licenses/by-sa/3.0/>, via Wikimedia Commons

In England, silver is marked with a walking left facing lion (often referred to as the lion passant), which indicates sterling silver. This is the first and most important mark to look for. 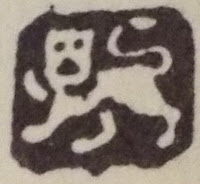 Next, look for a mark representing the town where the piece was made. Here are the most common ones:

Next, look for a date letter. British date marks range from A-Z. One letter represents an entire year and then it changes the next year. Styles of the letters change on average every twenty years as you make your way through the alphabet. This is where a reference book comes in handy. I will list suggested reference books and websites at the end…but first I want to unravel the mystery of all these different date marks. Don’t be overwhelmed! Once you learn this skill, it is easy and fun to discover the history of your British silver.

Go to the section of your reference book or website for the town that is listed on your piece. Let’s say a crown like the hallmark pictured at the beginning of the article. Go to the section of the book for Sheffield. Look for a matching date letter for you piece. Use a magnifying glass to see the mark clearly or take a zoomed in photo with your phone. You will notice that the letters font, capitalization and background or shield around the letter varies. Run your finger down the line of date letters until you find a match. Referring back to the hallmark pictured above. The date letter “N” pictured in that mark refers to a date of 1905. One additional note…sometimes you will see an additional mark of a King or Queens head. This is known as a duty mark. You will only see this mark in certain years. The good news is that it makes finding the date mark even easier.

Part of the mark on your piece may be a maker's mark. These look like a group of initials. They can require quite a bit of research to find an exact match. It can be worth your time to track down the maker since who made the piece can be directly related to the value of the object. A few of the most famous are Paul Storr, Hester Bateman and Charles Ashbee.

Another question I hear is “I have a piece of silver, but it doesn’t have a mark?” The mark may not be on the bottom of the piece. They can be a challenge to find. Sometimes, a piece may be marked around the rim or around the edge base. If your piece has a lid, pull the lid off and look underneath. Anything that is detachable should bear the lion passant mark and the maker’s mark.

Bradbury’s Book of Hallmarks: a Guide to Marks of Origin on English, Scottish and Irish Silver, Gold and Platinum and on Foreign Imported Silver by Frederick Bradbury

Jackson’s Hallmarks: English, Scottish, Irish Silver and Goldmarks from 1300 to the Present Day by Ian Pickford

Larkspurs by Jane Peterson Medium: Oil on canvas This piece is a perfect example of Jane Peterson's dazzling use of color and confid... 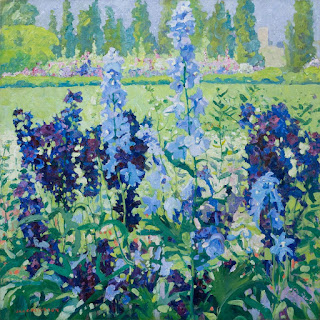 Wyeth Appraisals
Lucinda Wyeth is a fine art and antiques expert with over 30 years experience in the visual arts and 25 years experience in the appraisal field. She is a member of the Appraisers Association of America, the premier national association of personal property appraisers who focus on fine and decorative arts. All members of Appraisers Association of America are required to be certified according to the highest professional standards in the field known as USPAP (Uniform Standards of Professional Appraisal Practice). Lucinda’s areas of specialization include 19th and 20th century American paintings, prints and sculptures.